[accessible activism] for Our Lives

The March for Our Lives brought people together across the globe. People of all ages, colors, and parties took to the streets to demand safety for...
4 minute read
Healthcare Activism Protest Accessibility Disability 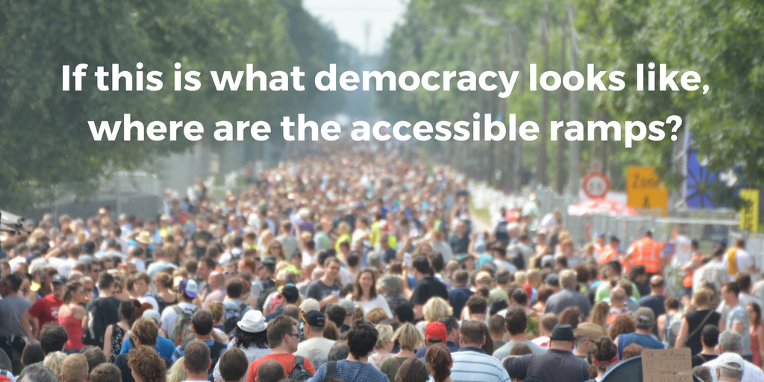 The March for Our Lives brought people together across the globe. People of all ages, colors, and parties took to the streets to demand safety for our children.

I look at the dramatic pictures of people marching, holding signs above their heads, while my Twitter feed of patients and people with disabilities fills up with the reality I know.

People with disabilities are not always included.

Last week I wrote about the Inherent Privilege of Advocacy, calling attention to the challenges many patients and people with disabilities face to participate in in-person advocacy opportunities, like conferences and meetings.

This, too, is the case in our current paradigm of activism. But marches are not the only way people can show their support for these important issues.

My husband is an activist [now law student] and over the years, I have participated in demonstrations and marches. While I understand there must be a call to action to get people engaged, our current state of activism seems to suggest that if you’re not in the streets, you don’t care enough. As a person with disabilities, I knew this wasn’t true.

I also knew the activists around me didn’t mean to imply this rhetoric to people with disabilities, yet by not creating accessible ways to participate, it takes the choice away.

People with disabilities care just as much (and at times, more) about the topics at hand, we just aren’t creating spaces to include them. I have personally felt I had to explain why I am not out on the streets, an uncomfortable position for anyone with a disability.

I’m not saying don’t march. Please do. Please, practice your First Amendment right to express your beliefs and defend your civil rights, especially for those not present.

I’m saying remember those with disabilities or conditions that keep them from the streets. Because not only do we not talk about disability rights enough, but we leave them out of other conversations.

When people take to the streets for Black Lives Matter protests, the Women’s March, and now March for Our Lives, accessibility is often an afterthought.

Disability is the forgotten demographic.

Kerry should be interviewed, not because she is the shiny object in the crowd, but because she is an advocacy rockstar and has just as much to say about the topic as anyone else. She described her experiences this weekend at the March for Our Lives:

Someone came over to me to say how glad he was that I could be there — that his wife has mobility issues, so she couldn’t join him. A few other people approached to ask about my scooter, either for themselves or for a loved one with mobility problems. But no one approached to talk to me. No one asked if I lived in the neighborhood or had kids at one of the local schools. No one talked to me about how great the turnout was or how awful the situation that brought us all out there. In their eyes, I wasn’t a person marching to protest gun violence, just like they were. I wasn’t a person at all. I was a mobility issue.

We’re just so used to not seeing people with disabilities, but just because you don’t see them regularly doesn’t mean they don’t care just as much.

While many took to the streets on Saturday, another Savvy Co-op Member, Erin Gilmer, took to Twitter to share her voice and remind of this important issue.

If you have other resources you turn to, follow or contribute to on how people can get more involved with these (and future) issues — from home or in accessible ways — please tag us on Twitter/Instagram @savvy_coop, and we will help amplify them. Your voice matters.

Savvy Cooperative is a co-op, co-owned by diverse patients, people with disability and other helpful citizens. Savvy gives people a platform to share their experiences living with health conditions or navigating the health system so that together we can accelerate change.

Why I took my clothes off for investors